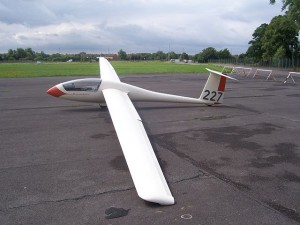 In designing the Mini-Nimbus, Klaus Holighaus incorporated the flapped wings from the Glasflügel 303 Mosquito, with the fuselage of the Standard Cirrus.The wings feature trailing edge terminal speed dive brakes-variable camber flaps that limit the vertical dive speed to a maximum of 70 knots when the dive brakes are fully deployed.

The name "Mini Nimbus" was adopted to distinguish it from longer-wingspan Nimbus models. It first flew on 18 September 1976.

The Mini Nimbus range all feature self-connecting controls, of Glasflügel design, for added safety and ease of rigging, and have been incorporated in all newer Schempp-Hirth models. The trim lever is connected to the flap operating rod and needs to be set only once per flight; thereafter changes in flap setting (-7 to +10 degrees) automatically provides trim compensation.