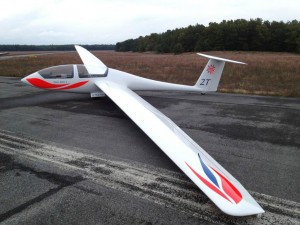 The Grob G 103 Twin Astir was a two-seat sailplane developed in Germany in the 1970s by Grob Aircraft AGas a counterpart to the single-seat G 102 Astir then in production. Construction throughout was similar, although to preserve the balance of the design, the wings were given a slight forward sweep. While many two-seat derivatives of single-seat sailplanes have fixed undercarriage, due to the added space restrictions created by the second seat, Grob devised a novel retraction system for the Twin Astir. The single wheel was designed to rotate 90° sideways before retracting "flat" under the rear seat, resulting in a rather unusual seating position. This was only incorporated in early examples, later on, the wheel was fixed. Options offered to customers included whether the front seat should be equipped with flight instruments, and whether water ballast capacity should be installed. Production continued until around 1980, when it was replaced in production by the Twin II, a new and not directly related design originally designated G 118 but later redesignated the G 103a.
Tony Wiederkehr
Crew: One Pilot Capacity: One Passenger Length: 8.1 m (26 ft 7 in) Wingspan: 17.5 m (57 ft 5 in) Height: 1.60 m (5 ft 3 in) Wing area: 17.9 m2 (193 ft2) Aspect ratio: 17.1 Empty weight: 390 kg (860 lb) Gross weight: 610 kg (1,345 lb)
Maximum speed: 250 km/h (160 mph) Maximum glide ratio: 38 Rate of sink: 0.6 m/s (120 ft/min)