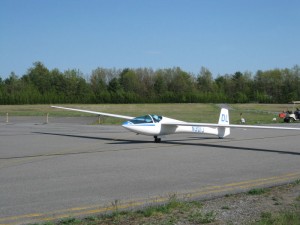 In 1964 the H-301 Libelle ("Dragonfly") received the first German and first U.S. Type Certificate issued to an all-fiberglass aircraft. It had flaps, water ballast and retractable landing gear. There are two canopy variants: the normal canopy and a sleeker, lower-profiled 'racing' canopy with no side vent. The canopy is unique in that it has a catch that enables the front to be raised by 25 mm (1 in) in flight to provide a flow of ventilating air instead of the more conventional small sliding panel used for this purpose. The American Will Schuemann pioneered several performance-enhancing modifications to the type, including a re-profiled wing, converting the airfoil to a Wortmann section, various fairings, a new canopy and a reshaped fuselage nose. Aircraft incorporating these changes are informally known as 'Schümanised' Libelles.
John Mahoney
Crew: 1 Capacity: 50 kg (110 lb) water ballast Length: 6.19 m (20 ft 4 in) Wingspan: 15.00 m (49 ft 3 in) Height: 1.25 m (4 ft 1 in) Wing area: 9.5 m2 (102 ft2) Aspect ratio: 23.6
Experimental
Maximum speed: 200 km/h (124 mph) Maximum glide ratio: ca. 40.5* Rate of sink: 0.55 m/s (108 ft/min)