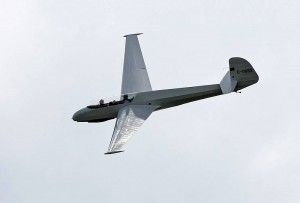 Series production of the Kranich (Crane) took place in the aircraft division of Karl Schweyer AG in Mannheim. The two-seater was, in its version 2, the most widely built two-seat glider in Germany from 1935 to 1939. Several hundred examples were built; exact numbers are not known. On 11 October 1940 Erich Klöckner in a Kranich achieved the record height in a glider of 11,460 m. Because it occurred in wartime, the altitude record was not recognized by the Allied occupying powers, and Klöckner only received official recognition by the Fédération Aéronautique Internationale (FAI) in the late 1990s.[1] This record height was only exceeded ten years after the flight by the American Bill Ivans during a similar scientific program in the Sierra Nevada. In 1942 30 Kranichs were built by the Swedish manufacturer AB Flygplan in Norrköping, and delivered to the Swedish Air Force for training purposes. These machines were given the military designation Flygplan Se 103.

Between 1950 and 1952 50 examples of a slightly modified copy of the Kranich II were built in Poland, known as the SZD-C Żuraw (żuraw is Kranich in Polish = "crane").

After the war, Jacobs designed the Kranich III, a new development very different from its predecessors. It was developed and produced at the Focke-Wulf aircraft factory in Bremen. The first flight was on 1 May 1952, piloted by Hanna Reitsch. Thirty-seven were built.