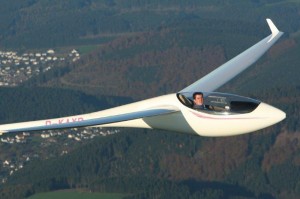 The ASW 24 was designed by Schleicher's Gerhard Waibel, with Delft University professor Loek Boermans undertaking the role of aerodynamicist. The prototype made its first flight in 1987, having entered serial production later the same year. It nominally remained in production until 2000, although only a score were built in the mid-to-late ninetiesThe ASW 24E is a nominally self-launching variant employing a Rotax 275 engine and a propeller mounted on a retractable pylon. The engine installation is peculiar for its small size and power, more typical of a turbo, and for its manual start with a pilot-operated ripcord.
Felix Noeling
Crew: 1 Length: 6.55 m (21.49 ft) Wingspan: 15.0 m (49.22 ft) Height: 1.3 m (4.27 ft) Empty weight: 275 kg (606 lb) Powerplant: 1 × Rotax 275 1 cylinder 2-stroke, 26 hp (19 kW)